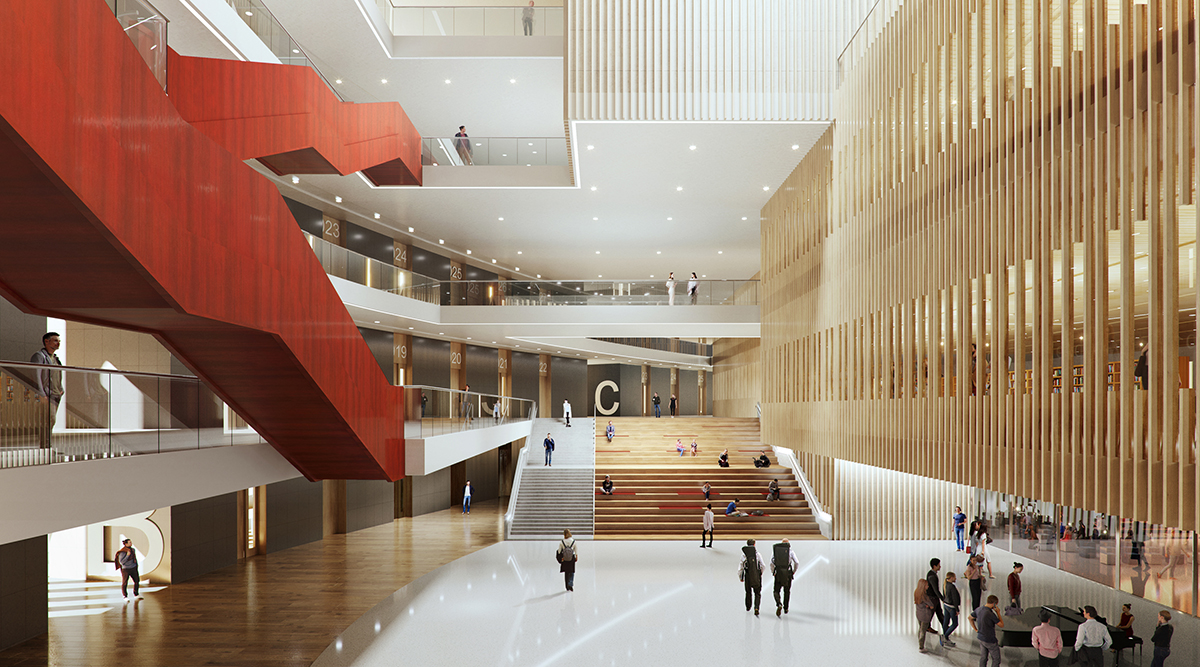 Gao Shan Liu Shui implies the utmost understanding of “music” in Chinese culture. The lush forest hills and clean lakes create a perfect setting to design the conservatory around this shared ideal of harmony, found both in music and landscapes. This campus is a landscape in itself, built up from the best elements of what already exists on the site. The channel is transformed into a lush river, gushing through stones, under bridges and past low-lying willows. The campus itself is then built around this river like a small valley town, with its most active parts opening up directly to the riverbed and the more private parts of the campus climbing up towards the peaks. This undulating mountainous form protects the inner valley from the traffic noise. Instead, the natural sounds, such as the sound of the flowing water, create the ambient background for the campus. The four main sections of the campus are placed each on their own hill: The main event halls are placed in the south, right by the campus’ main entrance along the river; the smaller halls and other teaching facilities continue to the west from the halls, creating the tallest hill; continuing to the north from those are the living quarters, intertwining with the open courtyards allowing generous daylight to enter every apartment, many facing the longer views towards north across the hills; the administration hill facing east also connects to the main entrance from this side of the grand vault across the river. The garden opens up to the east and west along the river, welcoming the academic life of both CUHK campuses. The main logistical arteries are towards south and north to the roads. Architecturally the campus is laid out in a clear grid, allowing for efficient use of space and structure. The rooms are clad in glass and matte white ceramics. The exterior envelope curves around the campus perimeter, creating a harmonious form blending into the landscape at large. The silhouette of the main form changes dynamically as one moves past the building, in a similar manner as experiencing natural landscapes from a moving vehicle. The direction of the sun at different times of the day greatly affects how the form is either brought out by the reflections and lights inside or blended into the landscape by the shadows. The windows ripple behind the copper façade forming a varying set of light effects, not unlike the reflections off the surface of calm water. These elements allow the building to feel naturally different every time one sees it, despite its large scale.